The existence of Africana Studies at Williams College is recognition that, even in the rural hills of Berkshire County, Massachusetts, Black Lives have always and continue to matter. It is my great pleasure to invite you to join the Department of Africana Studies as we commemorate our fifty-year presence at Williams. We hope you will consider coming back to Williams during the extended weekend of April 4-7th, where we will reflect and collectively remember. Please visit the Africana Studies website for the most up to date information and for general inquiries. Whether you are one our beloved alumni, a member of our extended community of family, friends, or guests, please find pertinent information about the weekend by visiting our dedicated registration page. You can also access photos from the weekend here. 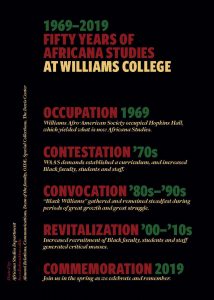 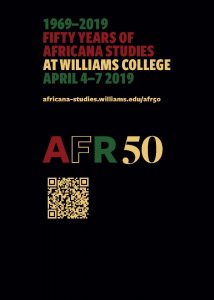 For Such a Time As This: The AFR50 Exhibit
Africana Studies MENU