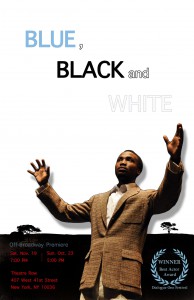 “Blue, Black and White” is an enchanting humanist story about Sir Seretse Khama. He married a white British woman in 1949 and their interracial marriage saw them being banned from many countries including Seretse’s own native Botswana. This piece is an exploration of love and courage and how they were the cornerstone to Africa’s most enduring democracy, the Republic of Botswana.

Performances at Theater Row (42st. and 8th Ave, New York City) will be as follows:

2011 United Solo, the world’s largest solo theater festival, presents seventy-seven solo productions! All shows are staged at Theatre ROW: 410 West 42nd Street, New York City. TICKETS, with a price of $18, are available at the Theatre ROW Box Office and online through Telecharge at www.telecharge.com. You may also call Telecharge at 212-239-6200. When placing your reservation, please provide: the FESTIVAL name (United Solo Theatre Festival), the name of THEATRE (Theatre ROW – The Studio Theatre), and the specific DAY and TIME of SHOW you would like to see.

See our Covid-19 website for strict health and safety protocols for those who remain on campus. All Williams College buildings are closed to the public and visitors until further notice.