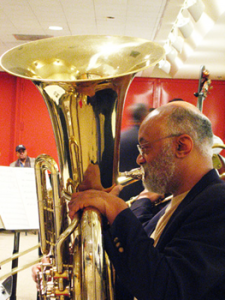 Bill Lowe, world renowned jazz trombonist, and tubaist, will be our Sterling Brown Professor this Spring, 2011. Professor Lowe will be teaching a class on the History of Jazz (Africana 130).

Students, sign up for this once-in-a-lifetime opportunity, and faculty/staff, please join the Music Department in welcoming this distinguished visitor to campus.

Bill Lowe is a performer, composer and educator whose recordings include work with Muhal Richard Abrams (Heringa Suite); Henry Threadgill (Rag, Bush and All); Frank Foster (Shiny Stockings, Manhattan Fever and We Do It Different); Trudy Silver (heroes/heroines); CMIF Orchestra (The Sky Cries the Blues); Andy Jaffe Sextet (Manhattan Projections); as well as the debut album of JUBA (Look On The Rainbow) and the albums of James Jabbo Ware and the Me, We and Them Orchestra, (TODAY’S MOVE, HERITAGE IS, SOMETHING’S COMING, and most recently, VIGNETTES IN THE STYLE OF ELLINGTON).

Current recording projects include four very different CD’s due for release in 2008-2010: Lowe is featured with the Frank Foster Loud Minority Big Band in a March 2007 release of a “rediscovered” recording from 1977 called WELL WATER; THE OTHER TET, which features Lowe in a Quarter setting is due in the fall of 2009; the October 2007 release of the first in a series of recordings by the BRIAN MCCREE QUINTET, is a collaboration with the legendary visual artist Paul Goodnight and will include a Lowe composition; and, finally, the much anticipated recording of the MAKONDA PROJECT will be released in December, 2010 and features some of the un-recorded compositions of Ken McIntire reworked in a 2010 context for a ten piece, intergenerational ensemble, featuring Lowe as trombonist and tubaist. 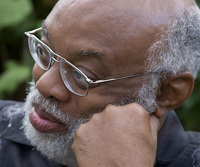 As co-leader of the Bill Lowe/Philippe Crettien Quintet, Lowe is co-producer and principal composer of that aggregation’s debut album, (Sunday Train). The 1991 French tour of the quintet included an engagement at the Sunset Club in Paris. The quintet served as featured performers and workshop faculty for the City of Toulon Jazz Festival, where Prof. Lowe was the Director of Pedagogy and Instruction from 1991 through 1995. In November of 1994, Prof. Lowe performed in the Jazz Festival in Kyoto, Japan, as a member of the Boston Blazing Jazz Orchestra. Lowe is co-founder and co-director of the Boston Jazz Repertory Orchestra

Prof. Lowe was co-producer and featured performer with the annual John Coltrane Memorial Concert in Boston from 1988 through 2006. As a member of Joyful Noise, the core performance and teaching group of the JCMC, Prof. Lowe continues to lecture and perform in a variety of elementary, middle and High Schools in the greater Boston area, as well as appearing on the debut CD, 12th Annual John Coltrane Memorial Concert and co-producing the second JCMC recording, COLTRANE’S ASHE! In 1995, Lowe and other members of Joyful Noise were members of the United States Delegation to the Inaugural Conference, “Culture and Social Transformation: Creative Improvisation,” held in Holguin, Cuba, January 3-10, 1995. The 12 member US delegation included a group of professors/musicians. As a scholar of African American Studies and as trombonist, tubaist and composer, Prof. Lowe shared music making practices and performance pedagogy in a series of lectures, concerts and research sessions with the assembled group of Cuban intellectuals, writers, educators and musicians. In addition, he extended his on going cultural studies work with the literary/musical environments of “Nuestras

Americas” by presenting a paper at the conference exploring the cross referencing of African American musical styles and images in the expressive constructs of Alejo Carpentier, Nicolás Guillén, Langston Hughes and Samuel Delany, entitled: “Towards a musical reading of Alejo Carpentier’s Concierto Barroco and Samuel Delany’s Neveryóna: The Deferred Dream books of Tomorrow’s Daily Daily Considered as BeBop Slave Narratives.”

Prof. Lowe was the recipient of a major commissioning grant from Meet The Composer and the World Music Institute in 1996 in support of another cycle of his SIGNIFYIN’ NATIVES composition project entitled “Living Lives, Telling Times: A ‘Trane Trip” for the annual JCMC concert. 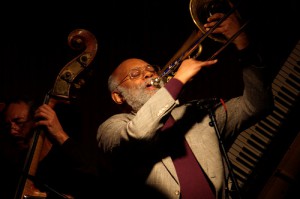 One of Lowe’s operas, Reb’s Last Funeral: Resolution of Invisible Whips, has received commissioning support from the Connecticut Commission for the Arts and Northeastern University. Another large work for theater is CROSSING JOHN AT THE CROSSROADS, with music by Lowe and text by Gilbert McCaulley which has been performed at the University of Amherst and the Cambridge Multicultural Arts Center: this “diaspora play” is intended for performances in Cuba, Brazil and the UK.

An Associate Professor of African American Studies and Music at Northeastern University from 1989 – 2005, Lowe is presently Louis Armstrong Visiting Professor at the Center for Jazz Studies, Columbia University. He is also on the faculty at Barnard College, Columbia University and the University of Pennsylvania and has also taught at Wesleyan and Yale Universities in Connecticut and the City University in New York. Professor Lowe is also an adjunct professor at New England Conservatory in the Musicology Department. His commissioned piece, LITANY OF DEFERRED DESIRE, a setting to music of the texts of Audre Lorde, Langston Hughes and Samuel Delaney, was premiered at Jordan Hall. As a trombonist and tubaist Lowe has performed with Carl Atkins, Gunther Schuller, George Russell and others at New England Conservatory.

Lowe’s “Paying Dues Towards An African American Aesthetic: An Autobiographical Essay” is Chapter 7 of The Triumph Of The Soul: Cultural and Psychological Aspects of African American Music, edited by Ferdinand Jones and Arthur C. Jones (PRAEGER, 2001).