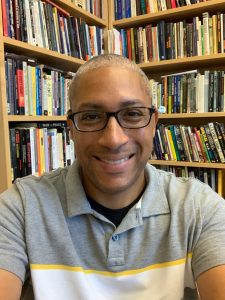 The Political Thought of Frantz Fanon (not offered 2022/23)

CAPSTONE: Sylvia Wynter, Black Lives, and Struggle for the Human (not offered 2022/23)

Neil Roberts teaches Africana studies, political theory, and the philosophy of religion at Williams College. He received his Ph.D. in Political Science from The University of Chicago with a specialization in political theory. A high school teacher, debate coach, and NCAA Division 1 soccer player at Brown University prior to graduate school, Roberts is the recipient of fellowships from the Andrew W. Mellon Foundation, Social Science Research Council, and Woodrow Wilson National Fellowship Foundation as well as a member of the Caribbean Philosophical Association Board of Directors.  His present writings deal with the intersections of Caribbean, Continental, and North American political theory with respect to theorizing the concept of freedom. He is the author of published and forthcoming articles, reviews, and book chapters in The Cambridge Dictionary of Political Thought, Caribbean Studies, Clamor magazine, The C.L.R. James Journal, Daily Nous, Encyclopedia of Political Theory, Journal of Haitian Studies, Karib, New Political Science, Patterns of Prejudice, Perspectives on Politics, Philosophia Africana, Philosophy in Review/Comptes Rendus Philosophiques, Political Theory, Sartre Studies International, Shibboleths, Small Axe, Souls, and an anthology devoted to the thought of Sylvia Wynter. Roberts is co-editor of both the CAS Working Papers in Africana Studies Series (with Ben Vinson) and a collection of essays (with Jane Anna Gordon) on the theme Creolizing Rousseau (2015), and he is the guest editor of a Theory & Event symposium on the Trayvon Martin case. In addition to being on the Executive Editorial Board of Political Theory and former Chair of CPA Publishing Partnerships that includes The C.L.R. James Journal and books with Rowman and Littlefield International, he is author of the award-winning book Freedom as Marronage (University of Chicago Press, 2015) and the collaborative work Journeys in Caribbean Thought (2016). His most recent book is A Political Companion to Frederick Douglass (The University Press of Kentucky, 2018). Roberts was President of the Caribbean Philosophical Association from 2016-19 and, since July 2018, he has served as the W. Ford Schumann Faculty Fellow in Democratic Studies. How to Live Free in an Age of Pessimism is his next book.