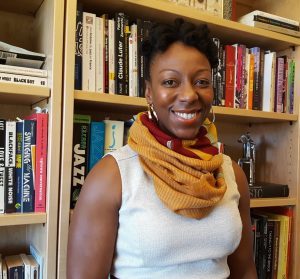 Note: courses in gray are not offered this academic year.

Groovin' the Written Word: The Role of Music in African American Literature

Dr. Braggs consistently interweaves her scholarly explorations with her pedagogical practices. As a postdoctoral fellow at Stanford University and visiting professor at the University of Heidelberg in Germany, she has taught classes in introductory theater and performance, race & gender in literature, and American literature & art history. Her courses at Williams College such as 13 Ways of Looking at Jazz, Groovin’ the Written Word: The Role of Music in African American Literature, Race(ing) Sports: Issues, Themes and Representations of Black Athletes, and Comic Lives: Graphic Novels & Dangerous Histories of the African Diaspora all teach students to explore ways that performance, though seemingly just entertainment, conveys much about a society’s values, patterns and negotiations of power. In addition to her scholarship and pedagogy, Dr. Braggs enjoys putting performance to practice by acting, writing, slamming poetry, singing, and playing multiple sports.