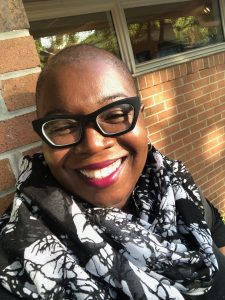 Professor of Africana Studies and Faculty Affiliate in Religion

Sacred Cinema: Black Religion and the Movies (not offered 2021/22)

The Society for Multi-Ethnic Studies: Europe and Americas (MESEA)

Society for the Study of Black Religion (SSBR)

LeRhonda S. Manigault-Bryant is Professor of Africana Studies at Williams College and founder of ConjureGirlBlue Productions. After completing her undergraduate education at Duke University, she received a Master of Divinity from Candler School of Theology at Emory University and a PhD in Religion from Emory’s Graduate School of Arts and Sciences. A proud native of Moncks Corner, South Carolina, Rhon navigates the academy as a scholar-artist, where she merges her life as an intellectual, musician and filmmaker. She is the author of multiple academic books, public-facing writing, and films including Talking to the Dead: Religion, Music, and Lived Memory among Gullah/Geechee Women (2014) and the acclaimed documentary short “death. everything. nothing” (2020). She has three works in progress including “Welcome to Toxic Tallevast” a documentary on environmental contamination in an African-American community on Florida’s Gulf coast; Pushing Weight: Religion, Popular Culture, and the Implications of Image, which utilizes film theory, womanist/black feminist thought, and ethnographic data to examine how popular culture and contemporary media forms simultaneously influence mass interpretations of the black female “religious” body; and a monograph entitled “Black Crossroads: Mourning Rituals and Geographies of Sacred Space. Whether investigating religious practices of specific communities or exploring cultural production at the popular level, critical to her research are questions that unearth how African Americans navigate processes of cultural commodification.

For her creative endeavors, Professor Manigault-Bryant has been the recipient of independent and national grants from the Andrew Mellon Foundation, Fund for Theological Education, the Ford Foundation, the Louisville Institute, the Wabash Center for Teaching and Learning in Religion and Theology, Emory University, Wake Forest University, Williams College, and the Woodrow Wilson National Fellowship Foundation.

Professor Manigault-Bryant, a former Bolin Fellow, returned to Williams after having taught at Wake Forest University.

Occasionally, you can find Rhon adding her colorful, critical, commentary to the digital universe via Twitter @DoctorRMB.